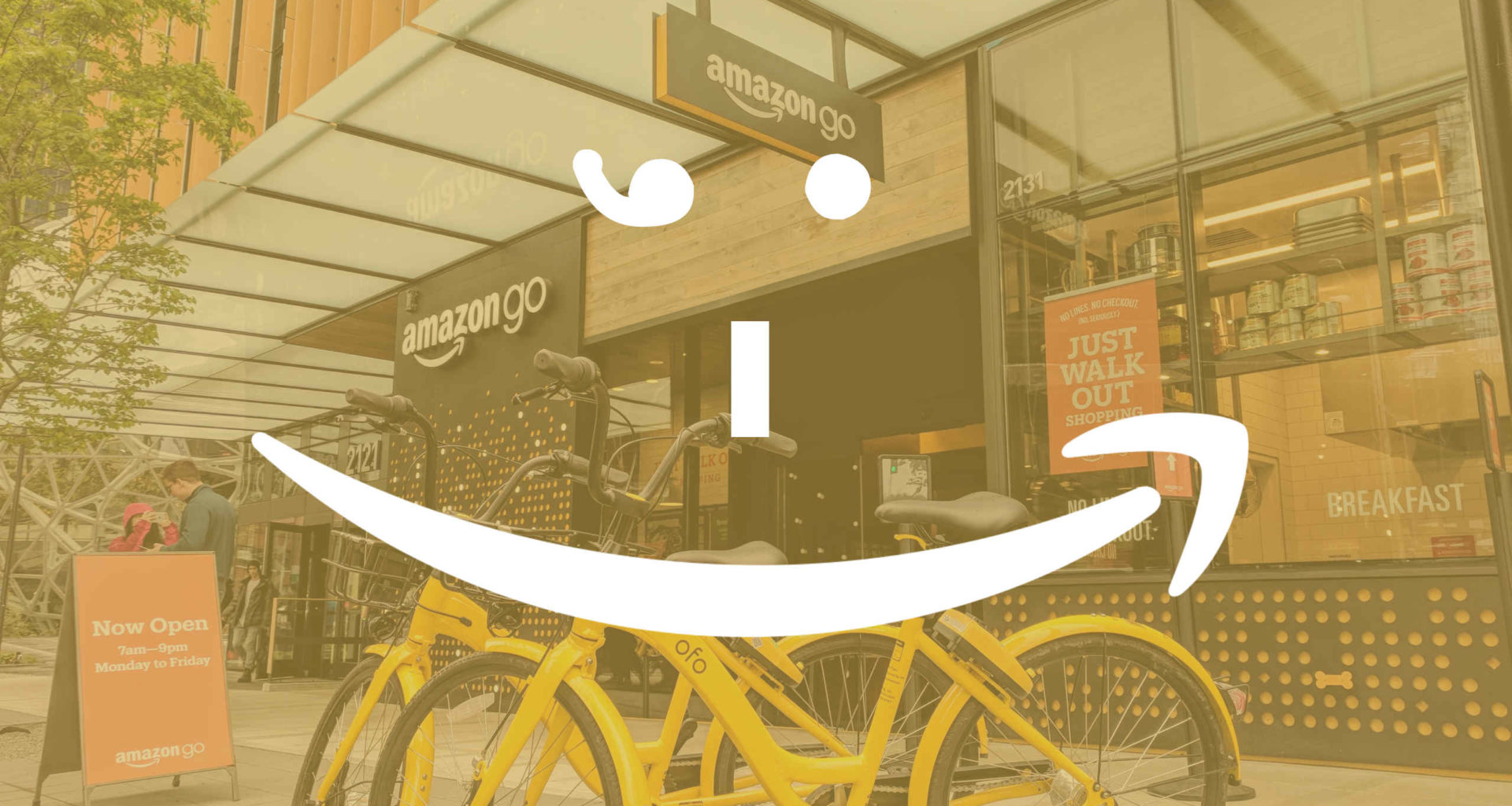 Amazon: What To Expect When Retail’s Loss Leader Gets Physical

Amazon Go previews the retail giant’s concept of physical stores. But what about the Amazon retail business model? Loss-leading is about to get physical.

It’s hard to overstate the sheer size of Amazon.  It sells around 120 million different products and has a market cap of more than $1 trillion; its mobile shopping app is used by more than 150 million people in the USA alone*, and it boasts more than 100 million Prime members – just in America**.  At the time of writing, Amazon’s founder Jeff Bezos is the third richest man in the world.  He’s previously been first.

But Amazon’s impact on retail is about much more than just numbers. Prime has reframed the way shoppers think about convenience. Jumbo jets crisscross the skies bearing the Prime livery, and there is the potential for drones to someday start dropping from the sky to deposit packages at our doors.  And now, with the $13 billion acquisition of Whole Foods, and a small pilot scheme of cashier-less convenience and grocery stores, Amazon is firing its first salvo at the broadside of brick and mortar retail.

None of this is news. Everyone knows that Amazon has completely overturned the retail landscape.  But what fewer people seem to consider is how they did it – beyond Bezos having the prescience to put a book store online –  and what their corporate and commercial history might mean for the future of physical stores. Because the underlying trends paint a gloomy picture for anyone who believes in a resilient, competitive retail industry.

Amazon started life with a quarter-of-a-million-dollar investment from Bezos’s parents. That was followed a year later by a further $8 million in Series A fundraising and, two years on, an IPO.

An early investment in Amazon would have been about the smartest fiscal decision you could have made in the late 1990s, with percentage returns on stock pushing well past six figures.  But why?  Amazon took six years to turn its first profit, and today the vast majority of its revenue is still reinvested in growth; Amazon routinely reports meagre margins on huge revenues.  Traditionally, this would have investors panicked, but instead Amazon’s share price keeps rising.

Far from being an anomaly, though, this is typical of so-called technology “unicorns,” putting Amazon in illustrious company with businesses like Twitter and Uber that seem to thrive on… not making any money.  (Financial disclaimer time: please don’t buy any more Uber stock, because that really does feel like putting good money after bad at this point.)

Here’s the insidious part: the market cares deeply how well traditional perform quarter-by-quarter.  Fashion brands in particular are judged harshly on their sales performance and profitability, and CEOs and Creative Directors are ousted without a moment’s hesitation if they fall short of the targets set by either shareholders or the conglomerates that own them.  But the market demonstrably doesn’t care if Amazon makes money – because it cares instead that it seizes market share***.

Amazon is the foremost practitioner of what economics fellow and author Matt Stoller scathingly calls “counterfeit capitalism,” or the practice of recouping enduring losses through the long-term acquisition of market power.

This strategy is the delight of institutional investors who can afford to wait decades for returns.  It is, no doubt, a high-risk strategy as the recent collapse of co-working office space company WeWork’s share price demonstrates, but when it pays off, it pays off in a big way.

Stoller defines counterfeit capitalism better than I ever could, so take it from him:

“This is of course Amazon’s model, which underpriced competitors in retail and eventually came to control the whole market. And Amazon has spawned a host of imitators, including WeWork. It has also reshaped venture investing. The goal of […] most large financiers in private equity and venture capital, is to find big markets and then dump capital into one player in such a market who can underprice until he becomes the dominant remaining actor. In this manner, financiers can help kill all competition, with the idea of profiting later on via the surviving monopoly.”****

If this all sounds a bit extreme, then try looking at it this way.  Amazon is really good at losing money, and after dominating eCommerce, physical retail looks like it might be the next game Amazon can afford to keep losing until it wins by default.  Because the other players on the brick-and-mortar retail field can’t get anywhere close to its resilience.

Put yourself in the shoes of an objective investor.  Who in their right mind, you’d think, would go into retail right now?  Regionally and internationally it’s a cutthroat bloodbath, characterised by razor-thin margins and constant disruption.  The answer is a company that doesn’t need to turn a profit for a long time – either because it has other revenue streams to prop itself up, or because it simply has the luxury of burning other people’s cash for longer than the competition, before parlaying its outlast-them-all market position into longterm profit.

To be clear: what I’m talking about is not the trend for digital-native brands to set up pop-ups and experience centres.  That has similar hallmarks in that those retail locations are not intended to make money, but the similarities end there.  I suspect what Amazon might have planned is an attempted coup with every traditional retailer as its target.

There is precedent here.  Amazon was once a bookseller with no presence in fashion, whereas today it owns more than 140 private labels and carries 640 brands you can’t buy anywhere else.  Of those, more than 300 are clothing, footwear, and accessories brands*****.  And when Amazon does act in a marketplace capacity for third parties, it has a nasty tendency to gather data on their sales, then rip them off by undercutting them with own-brand copies.  And that’s before we even consider Amazon’s habit of copying the products of successful brands such as Allbirds who choose not to use it as a marketplace channel.

So is the concept of an Amazon clothing store an insane one? I don’t believe so.  It has the products, it has the budget… and it has the technology.

Aside from being a major shareholder in direct-to-fabric and direct-to-garment digital printing company Kornit, Amazon has invested heavily in computer vision as a way of managing the invisible checkout process at its Amazon Go and grocery testbed locations in Seattle.  And if its own-label food and beverages aren’t already being sold there, they soon will be.

Could Amazon offer the same curated brand experience as a brick and mortar fashion location? Probably not.  At least not right away.  But could Amazon beat other retailers on convenience, technology, variety, backend distribution network and, above all, price? Absolutely.  The concept of a clothing store with no cashier and no sales assistant has never been tried before – and whether shoppers are actually permitted to just walk out with their goods (with the total being charged to their Amazon account when they leave) or whether Amazon simply leans on Prime Now to deliver the right size and colour to their office that afternoon, those other things could count for a lot.

And, as we’ve established, Amazon could stay in the physical fashion retail game for an alarmingly long time – even when it doesn’t seem, on the surface, to be going their way.

Is this a foregone conclusion? No. People trust Amazon as an arms-length deliverer of goods, but very few consumers have any real affinity for the name in the way they do more established, storied fashion brands.  But as Amazon has proven with its online private label strategy, shoppers don’t actually need to realise they’re even buying Amazon products.  What’s to prevent Amazon creating pop-ups for their wholly-owned and exclusive brands and trialling the market that way?

Retail is a notoriously fickle environment, where the balance between trying new things and being too traditional is where businesses either thrive or wither away.  And until now, only the largest retailers and biggest luxury brands have had the budgets to really experiment without going bust.

Amazon, on the other hand, could afford to experiment almost indefinitely – not just because revenue from Amazon Web Services supports their other ambitions, but because their entire business model is architected that way.  Unlike other retailers, Amazon seems to be capable of essentially forever delaying the day they need to pay the piper.  This is something no other retailer can match, because it is, essentially, not a retail business model at all – it’s a different concept of value, ported over from Silicon Valley, where the rules that apply to the rest of us are suspended.

One thing is certain: when Amazon moves further into the high street (and I believe it’s a when rather than an if) things are going to get physical.

IInterviews
Read More
When retail returns to full capacity, it will be operating in a changed world. What shoppers want from physical stores and online channels has evolved rapidly, and Rebecca Morter believes retailers need to catch up - and quickly.
PPlanning For The Future
Read More
Once a matter of manual analysis and intuition, planning what products to bring to market is now data-driven. Discover the latest in planning for fashion.
33D - Technical
Read More
We examine the history of sizing surveys, and look forward to a future where fit can be personalised through technology.
33D - Technical
Read More
The Interline talks to Ewelina Barlak, a red carpet patternmaker, about how 3D is being used in the highest echelons of fashion.
eeCommerce - Storefront
Read More
Free postage has become a trap from which many brands cannot break free without risking market share. It is right up there with the ‘free plastic carrier bag’ as one of retail’s big, bad ideas.
FFactories Of The Future
Read More
With our 3D focus over, we look at why an analogue gap exists between the output of design and the output of manufacturing. And we introduce our two-month deep-dive on how that gap can be bridged.